A “cenote” is a natural pit, or sinkhole resulting from the collapse of limestone bedrock that exposes groundwater underneath. Especially associated with the Yucatán Peninsula of Mexico, cenotes were used by the ancient Maya for sacrificial offerings.
The term derives from a word used by the low land Yucatec Maya, “Ts’onot” to refer to any location with accessible groundwater. Cenotes are common geological forms in low latitude regions, particularly on islands, coastlines, and platforms with young post-Paleozoic limestones that have little soil development.
Cenotes are surface connections to subterranean water bodies. While the best-known cenotes are large open water pools measuring tens of meters in diameter, the greatest number of cenotes are smaller sheltered sites and do not necessarily have any surface exposed water.
The water is often very clear, as it comes from rain filtering slowly through the ground.
Cenotes around the world attract cave divers who have documented extensive flooded cave systems through them, some of which have been explored for lengths of more than 100 km (62 mi).
Cenotes are formed by dissolution of rock and the resulting subsurface void, which may or may not be linked to an active cave system.
Where a cenote, or the flooded cave to which it is an opening, provides deep enough access into the aquifer, the interface, called halocline, between the fresh and saline water may be reached, which means a sharp change in salt concentration over a small change in depth.
The Yucatán Peninsula has almost no rivers and only a few lakes, and those are often marshy. The widely distributed cenotes are the only perennial source of potable water of the Yucatán Peninsula. 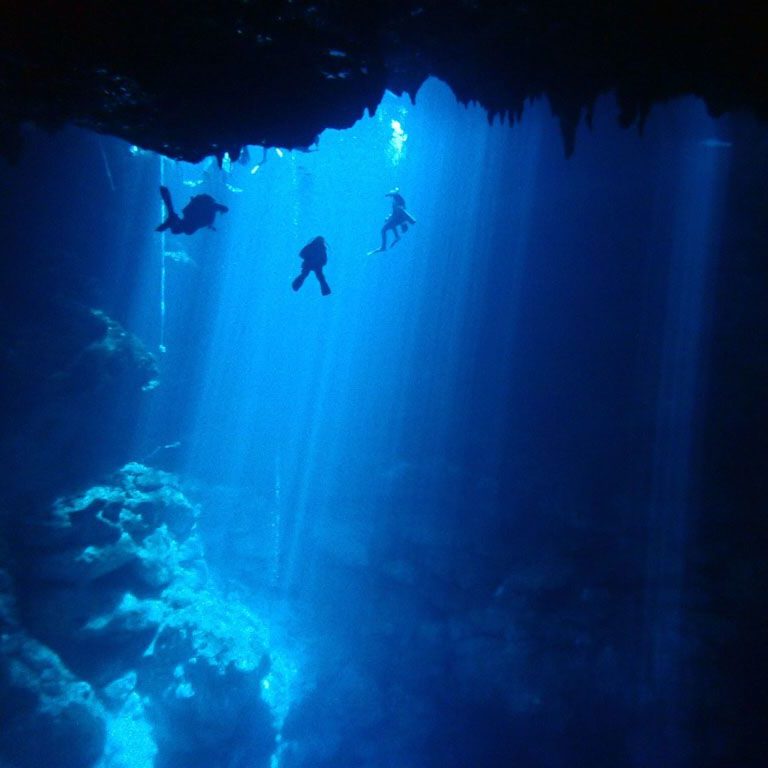 The Pit is a beautyful deep cenote (more than 100 m/ 300 ft), part of the “Dos Ojos” system, deep in the jungles 20 minutes south of the dive centre. It’s depth, the light effects (especially in the morning), the decorations at shallow depth and cave entries at different depths, make this divespot a must for every type of diver level (from guided recreational from a professional cave diver or for certified technical divers). 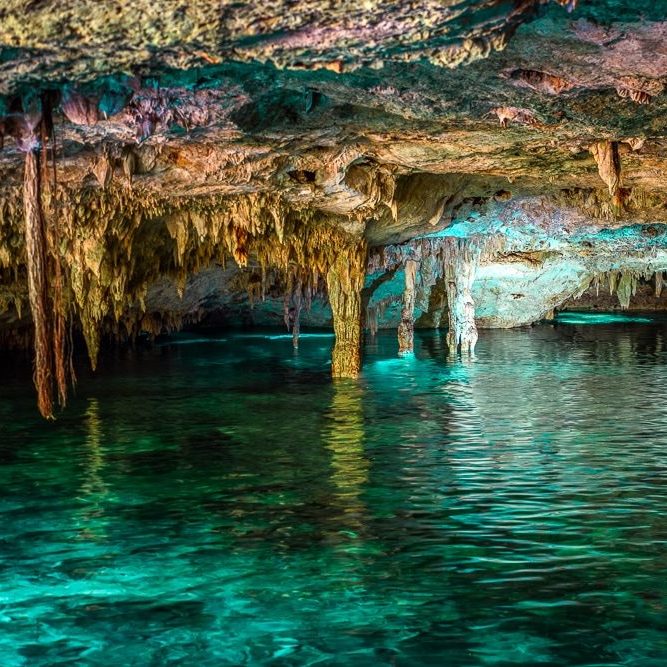 South-east from the “Pit”, Dos Ojos means “two eyes” and describe this magic cenotes that are a little different from the usual ones. It’s a two shallow dives (10-12 m/ 33-40 ft), perfect to be combined with a morning deep dive in the Pit.
Two cavern dive there are possible, both circuits (Bath Cave & Barbie line). 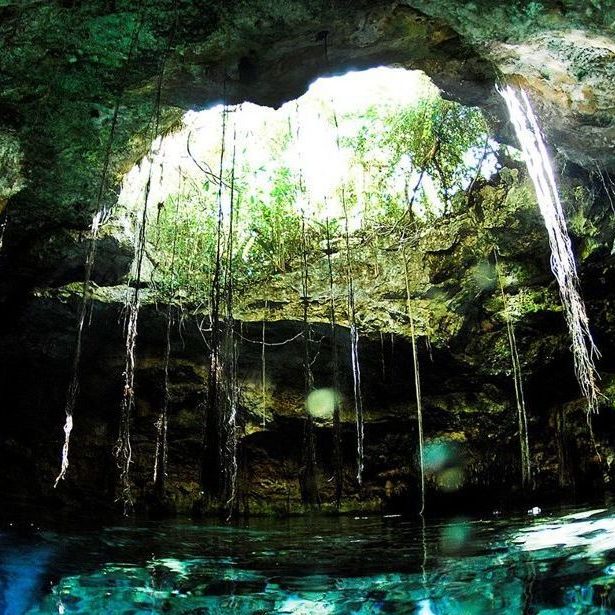 Taj Ma Ha, a mayan mistake of the “Taj Mahal” spelling, get this name because of its gorgeousness. At the right day time the light gets spectacular in the cavern area. Its maximum depth is 15 meters / 50 feet. To aware the nice decorations and fossils a good buoyancy control is even more important for this dive site. CAR WASH (AKTUN HA) – ANGELITA – EL EDEN-PONDEROSA These are just the most famous but we got more to offer 🙂 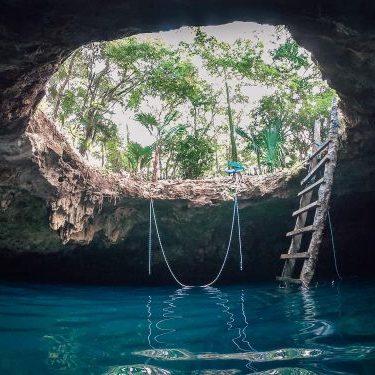 Cenote Calavera or “Temple of Doom” is one of the nicest Tulum dives. The entry is already an adventure, with a jump of 3 meters / 10 feet. The cavern dive is a circle around the cenote that is much bigger than what you think when you are on land . A special atmosphere is created by the concentration of the light in the centre that gets absorbed from the darkness of the cave. 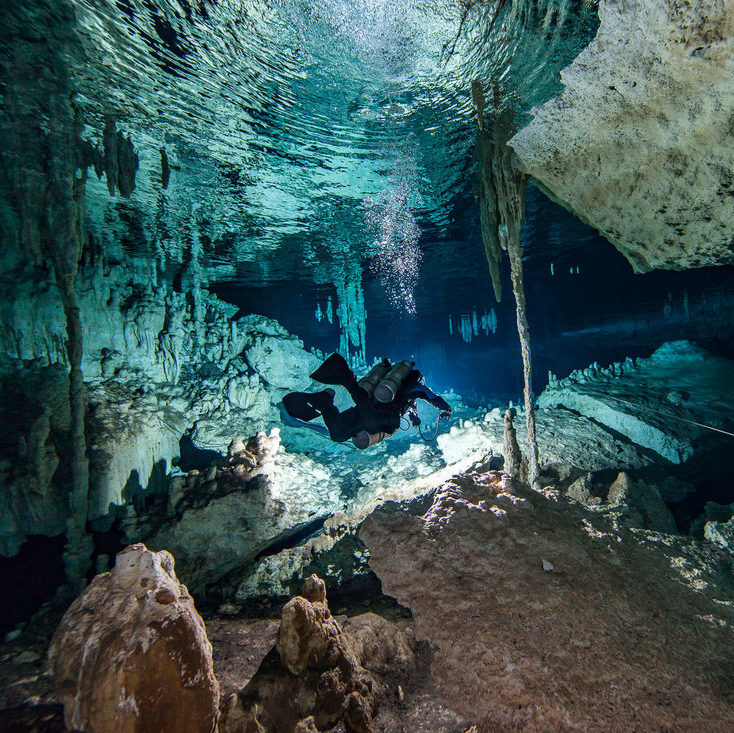 The mayan name means the “Giant Bird Cage”, Is one of the most decorated cave of the area and part of the “Sac Actun” system. This cenote is south from the dive centre passing “Dos Ojos” for some kilometers/ miles. For many years this dive site as been explored and studied from technical divers and speleologists, and offers, with guidelines, panoramic tours in the darkside of the Riviera Maya. 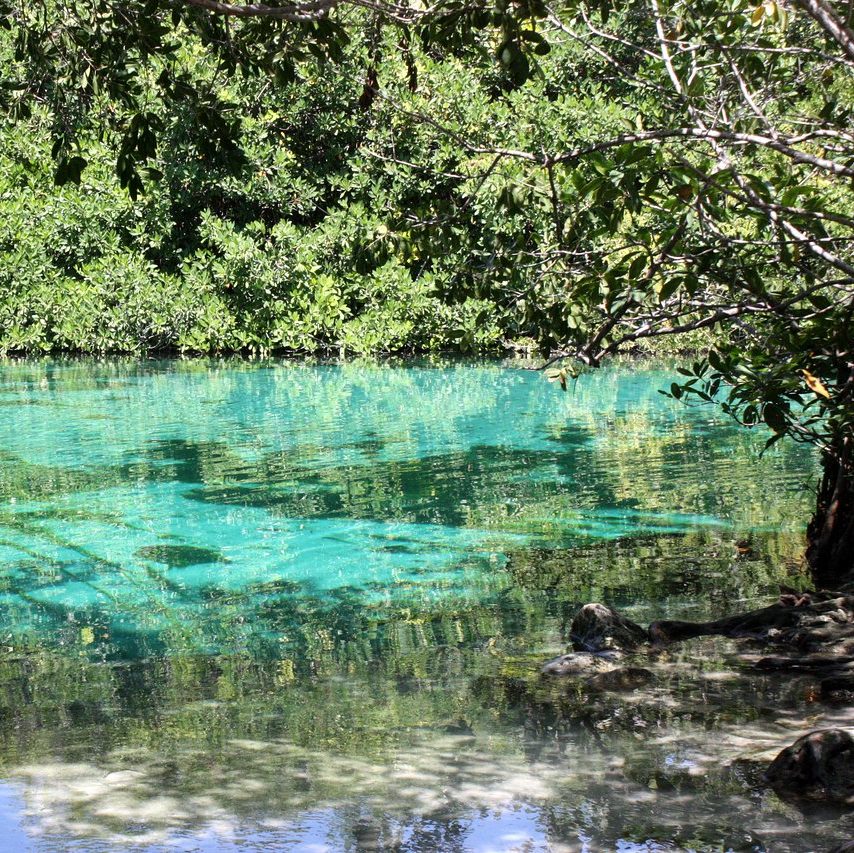 CSouth of the dive centre, on the sea side, Casa Cenote is really different with a mangroves surrounding. It is closely connected to the sea, the exit of the fresh water comes from “Nohoch Nah Chich”, part of the “Sac Actun” system (the second longest underwater cave system). This dive is something really particular. The mix of fresh and salt water creates a magic senario, and the many mangroves passages make the diver feel exploring the jungle underwater. The big open water area is ideal for courses. There lives Poncho the crocodile who you might see sometimes chilling around. 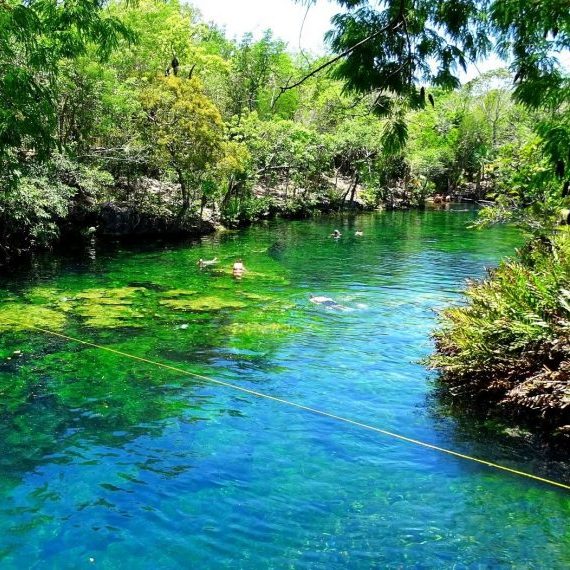 Part of “Ponderosa” El Eden is a really fashionable cenote. The big open water area with shallow and medium depths, cavern and caves starting from different sides and the jumping tree make this place really crowded but magic as well. There is something nice in this huge melting-pot of families, young friends, tech and rec divers, and student divers. The cavern line takes you to cenote “Coral”. The clear water allows to see the light of this cenote after some minutes starting the tour from El Eden. 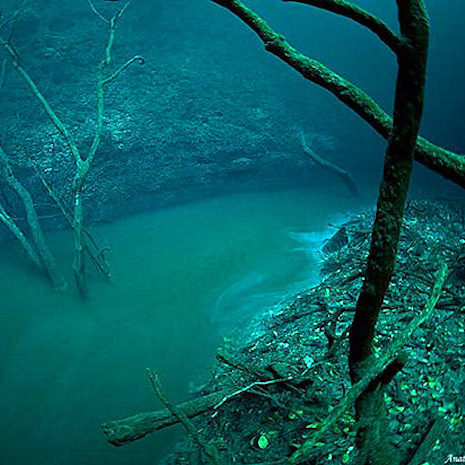 South of Tulum, Angelita is distinguished by its magical setting: a cloud of hydrogen sulfate at about 27 meters with trunks and vegetation remains. The cenote can reach 40 meters deep, and due to the cloud, it is necessary to be a fairly experienced diver to be able to appreciate the scenery in complete safety.
Scroll to Top